The goal of our new marine collagen product is to come with so-called Neu5gc-free collagen. What is Neu5gc? What's in it? Why and who needs to know about it?

It is also important to emphasize that the consumption of mammalian foods and Neu5gc are not inherently harmful, and in many respects mammalian foods are also healthier, such as e.g. the poultry (e.g. o6 / 3 ratio, K1 + K2, CLA).

It has been observed that 3x the amount of antibody against Neu5gc can be detected in people with hypothyroidism, while 7x the amount can be detected in people with Hashimoto! Both can be classified as autoimmune diseases. Neu5gc is presumably a major cause of these diseases, but at least the improvement may be greatly aided by a significant reduction or expulsion of Neu5gc from the diet, as this minimizes antibody production, thereby reducing inflammation and thyroid suppression while improving immune function.

In summary, anyone can benefit from avoiding/reducing foods containing Neu5gc (especially mammals, dairy products, butter, but also eggs/caviar), but this is especially important for those with thyroid problems! It may be worth moderating for other autoimmune diseases, but in any case, as long as we keep the Autoimmune Protocol (AIP), it is advisable. Interestingly, Rheumatoid arthritis (RA) is also an autoimmune disease, but it presumably has nothing to do with Neu5gc. Thus, in some autoimmune protocols, I believe that avoiding Neu5gc may also be an important element in the future.

Collagen proteins are almost totally absent from the modern western diet, as most of our protein sources are muscle meat and not the animal parts that contain lots of collagen (bones, skin, joints, etc.). Of course, nowadays we eat less and less tripe, aspic, bone stock, pig’s trotters and such. That is a big mistake! Given that the protein offal content of animal bodies is also mostly collagens. Our ancestors and modern hunters-gatherers did use every part of an animal, they did not just eat its meat. It is only logical that a large majority of their protein supply should be collagen proteins. Studies have identified, that during our evolution we adapted for high consumption of collagen proteins as it is a healthy way of living.

Caloric restriction (CR) results in a significant increase in the life span and decrease in the risk of diseases in animals. This was easy to confirm in animals. They simply gave less food to the animals in the study and observed how longer they lived compared to the control group and what the decrease was in the occurrence of diseases. In the case of human research, scientists historically measured markers to advance studied conclusions. The positive effects of CR on longevity and health is generally considered to result from the decrease of IGF-1 or insulin-like growth factor levels and the increase in IGFBP-3, with the latter being the protein that binds IGF-1 and thus neutralising its negative effects. Only short term studies were conducted on human CR until 2008 (several weeks - months). These concluded that the levels of IGF-1 are reduced also in humans, thus CR appeared to be effective. However, the results of the first study on long term CR in humans were published in 2008. Here it was found that CR results in a lower IGF-1/IGFBP-3 ratio only for 3 months; afterwards the ratio increases. At the same time, the IGF-1/IGFBP-3 ratio remained low in the long term in the vegan group with high calorie and carbohydrate intake and low protein intake. Some members of the CR group were then asked to continue their CR diet while keeping their protein intake low, similar to that of the vegan group, after their IGF-1/IGFBP-3 ratio returned to its original, high level. As a result, the ratio decreased again to the favourable level. The researchers concluded that, contrary to the findings in animal studies, CR will only result in an increased life span in humans if both their caloric and protein intake are restricted (~0.8 g protein/body weight kg).

Another study in 2012 found that a so-called mTORC protein complex is strongly and directly activated by BCAA amino acids, especially by leucine. These amino acids are only found in large amounts in milk proteins and meat. The increased activity of mTORC is a big problem as both IGF-1 and insulin exert their negative effects through this complex. The activity of mTORC is increased by IGF-1 and insulin as well. Thus it is harmful if they are present at high levels. Increased mTORC activity reduces life expectancy and increases the risk of life-style diseases. Today, medicinal products are being developed against cancer and cardiac attack based on the inhibition of mTORC activation. These researchers concluded that a paleolithic type diet that lacks meat and is based on vegetables and complex carbohydrates would be the most appropriate.

Animal studies were conducted where researchers eliminated specific amino acids from the diet. Both the elimination of methionine and tryptophan resulted in a longer life span of animals, though they did not reduce calorific intake.

All this supports the importance of the predominance of collagen proteins. Why is that? As mentioned at the beginning of the article, collagen proteins hardly contain any of the problematic amino acids (BCAAs, tryptophan, methionine), while meat and milk proteins have plenty of them. The modern populous eat much more protein than the 0.8 g per body weight kilogram recommended by the 2008 study, and it is also impossible to follow a diet based almost solely on vegetables, proposed by the 2012 study. Such a low intake of proteins would be unhealthy anyway, resulting in muscle degradation, weakening of the immune system and indirectly in the reduction of bone density.

Collagen proteins, therefore, reduce the activity of mTORC and help decrease the levels of tryptophan and methionine. All this results in better health and longer life. What is more, a new study in 2014 may also suggest that even the level of IGF-1 can be reduced with collagen proteins without side effects, which in turn increases life expectancy.

Thus! we can eat lots of protein, but be careful to provide only half of our intake from muscle meat, and the other half from animal parts with high collagen content (or with collagen supplementation).

First, it is important to clarify that the normal edible gelatine (such as aspic) is made up of giant proteins, hardly digestible at all. Pre-digested (hydrolyzed) gelatine/collagen was used in each study (mostly in the form of a powder that can be mixed in drinks). These contain collagen peptides instead of intact proteins. There is no evidence to suggest that normal gelatine is effective or not.

What collagen peptides are good for?

The direct supplementation of collagen is good for:

Skin and hair
• Decreases the depth of larger wrinkles and prevents the formation of others; helps remove small wrinkles.
• Increases hydration and firmness of the skin.
• Increases levels of collagen and elastin in the skin,  thus the elasticity of it.
• Increases the measured level of haemoglobin in the skin, resulting in a better microcirculation.
• Reduces facial sebum and thus the occurrence and severity of acne.
• Results in thicker and stronger hair; speeds up hair growth.
• Reduces seborrhea (greasiness of hair and dandruff)
• Reduces diffuse and androgenic hair loss (in men and women also)

Miscellaneous
• Reduces joint pain
• Increases the efficacy of sleep  (due to its glycine content)
• Increases learning abilities, memory and recall functions without stimulation (glycine).
• Increases the production of new neural cells in the cerebrum (only mice studies performed).
• Helps cut back appetite by balancing the hormones produced by the digestive system.
• Improves peripheral blood circulation (scalp and fingers). 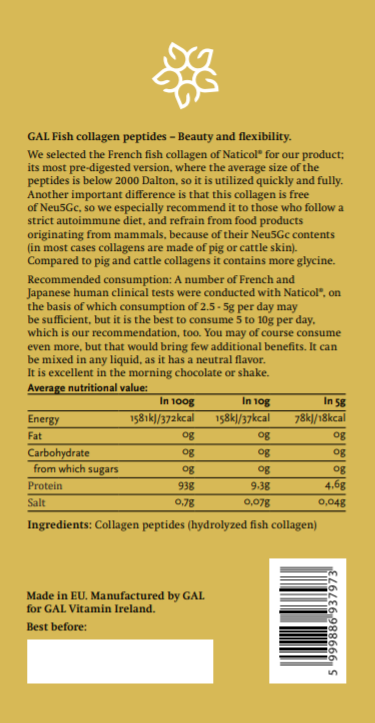